A year after the success of the Surrey Board Of Trade’s local campaign, “Thank You Surrey“, the organization once again approached Blue Meta for help on strategizing and implementing an updated version of it.

Driving this change was a sense from the local business community that consumers were feeling the long-term effects of the pandemic. During the first year of the pandemic, there was a sense of hope and optimism. One year later, there was burn out, frustration and hopelessness. So even though this campaign was an evolution of the previous one, we wanted to shift the focus from reflection and gratitude to one of aspiration, perseverance and pride. Woven throughout this was the overarching goal of both encouraging and reigniting a passion for shopping local.

To achieve this, the messaging was captured in an updated stacked tagline and descriptor:
#SurreyStrong
Think Local. Shop Local.

The tagline represents the overarching theme and the rallying cry behind the campaign while the inherent calls-to-action in the descriptor (“think” and “shop”) were subtle reminders for the audience as to what was needed to persevere, stay strong and help the city of Surrey overcome current challenges and unplanned setbacks. Ultimately, it was to show that “we are all in this together” and that we’re “better together”. The new tagline and descriptor were showcased in the form of a modified map location marker or pin with a centre heart. 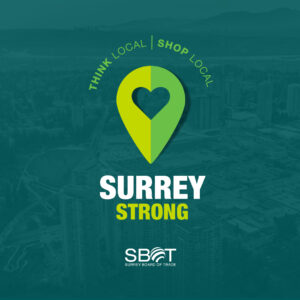 The rationale behind the logo was simple: it was about community, support and location. The heart signifies caring and takes the place of the usual dot that’s seen in the marker. The marker itself is made of two halves which speak to different cultures/people coming together. The two halves also cast a shadow, creating a 3-dimensional effect as if they are wings, lifting off, that speak to elevation and rising out of troubled times. 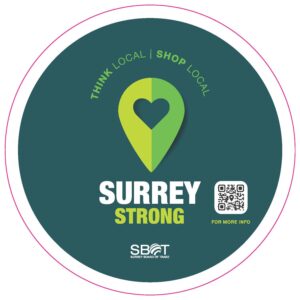 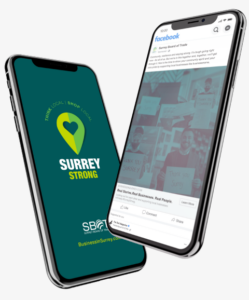 Giving the updated campaign a new look was just the beginning. The digital strategy also included other tactics including videos, a tool kit for businesses and a giveaway for local customers. The videos profiled local businesses owners and were also used as ads, social posts and website content. The toolkit was comprised of a sticker (above) that local businesses could affix to their storefront and a digital collection of guides and resources geared to helping them promote their products and services while inspiring community support. The giveaway was implemented to further drive engagement and awareness of the campaign.

Campaign measurement in the form of KPIs would be tracked via video views, likes/follows/shares and landing page visits.

THE OTHER ROI: Relevance, Originality and Impact In Digital Ads