With an already established and loyal following of their traditional, in-house jerky line, Meridian Meats turned to Blue Meta to design packaging which would help them stand out on the crowded retail shelf. After in-depth market research, Blue Meta helped to identify an entirely new target consumer of focus and developed brand and promotional strategies which resulted in the creation of an entirely new brand entity and cohesive packaging design.

For over thirty years, Meridian Farm Market has been a steady and well-trusted presence in the Fraser Valley. Originally founded as Meridian Meats & Seafood in 1989, the old fashioned-style market has since grown from butchery to artisan deli, in-house bakery, natural grocer, and seller of fresh and local produce.

While maintaining its unique, country-style farm market setting, Meridian has remained very much a family effort. Owned and operated by the Penner family since foundation, it has become well-known within the community for its quality meats and commitment to genuine, friendly service and has since expanded from one store in Port Coquitlam to seven locations altogether. 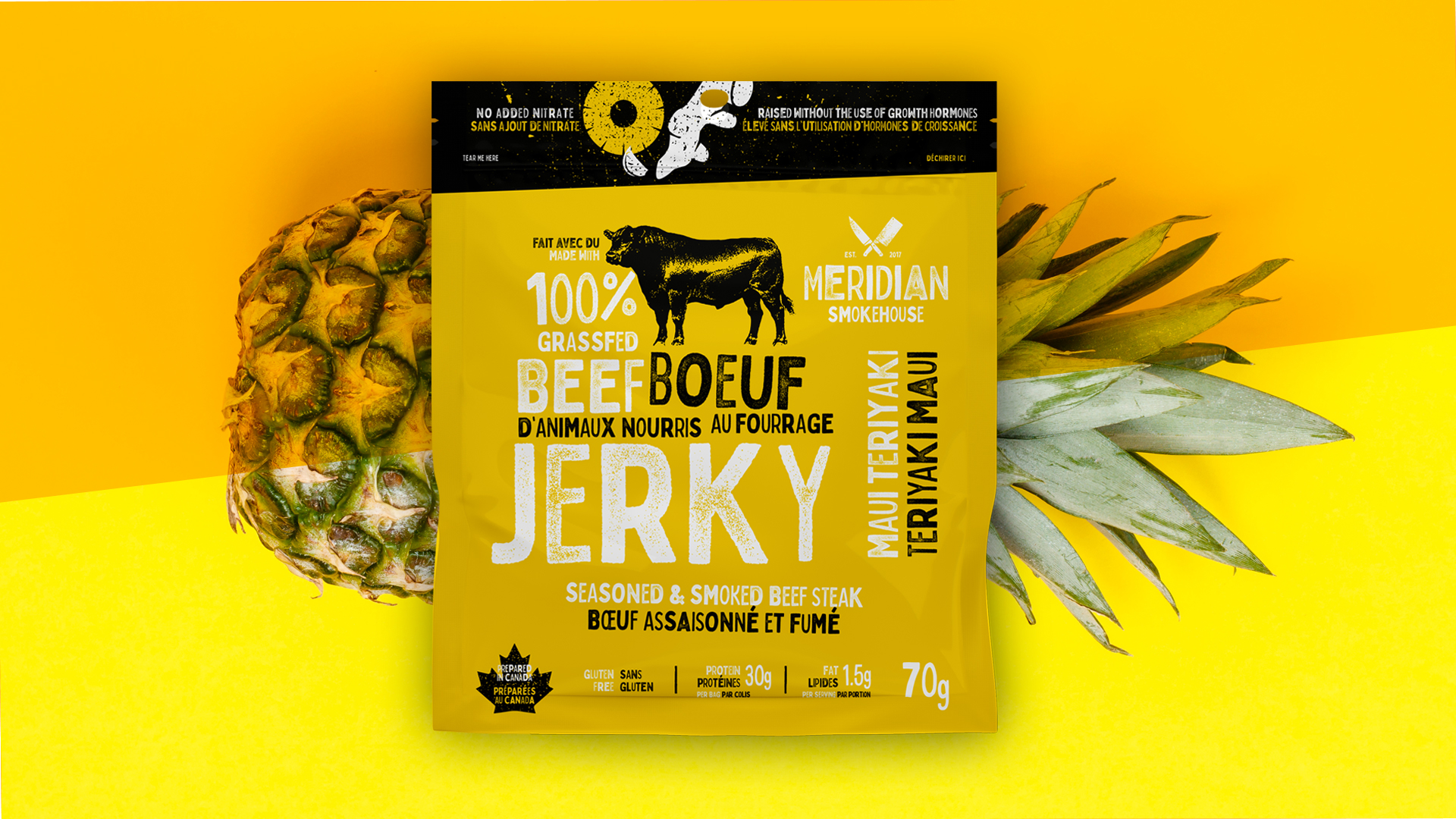 For years, Meridian Meats has produced and sold their own in-house, traditionally-flavoured jerky – sold primarily through their own retail locations.

To say that this secret family recipe has been well-received would be an understatement. However, the product had historically been sold without much of a brand presence, under generic manufacturer packaging, and without much fanfare.

While the flavour of their jerky spoke for itself, their existing brand was not doing them any favours when lined up next to the competition. With so many players already present in the market, and with the emergence of so many new competitors in recent years, sales were being impacted.

Intent on sharing their jerky with customers beyond their own stores, Meridian needed to find a way to stand out on the shelves. They needed a strategic partner to help them establish a cohesive brand foundation which would allow them to build brand awareness and to add additional flavours to their existing product line, in a uniform way. 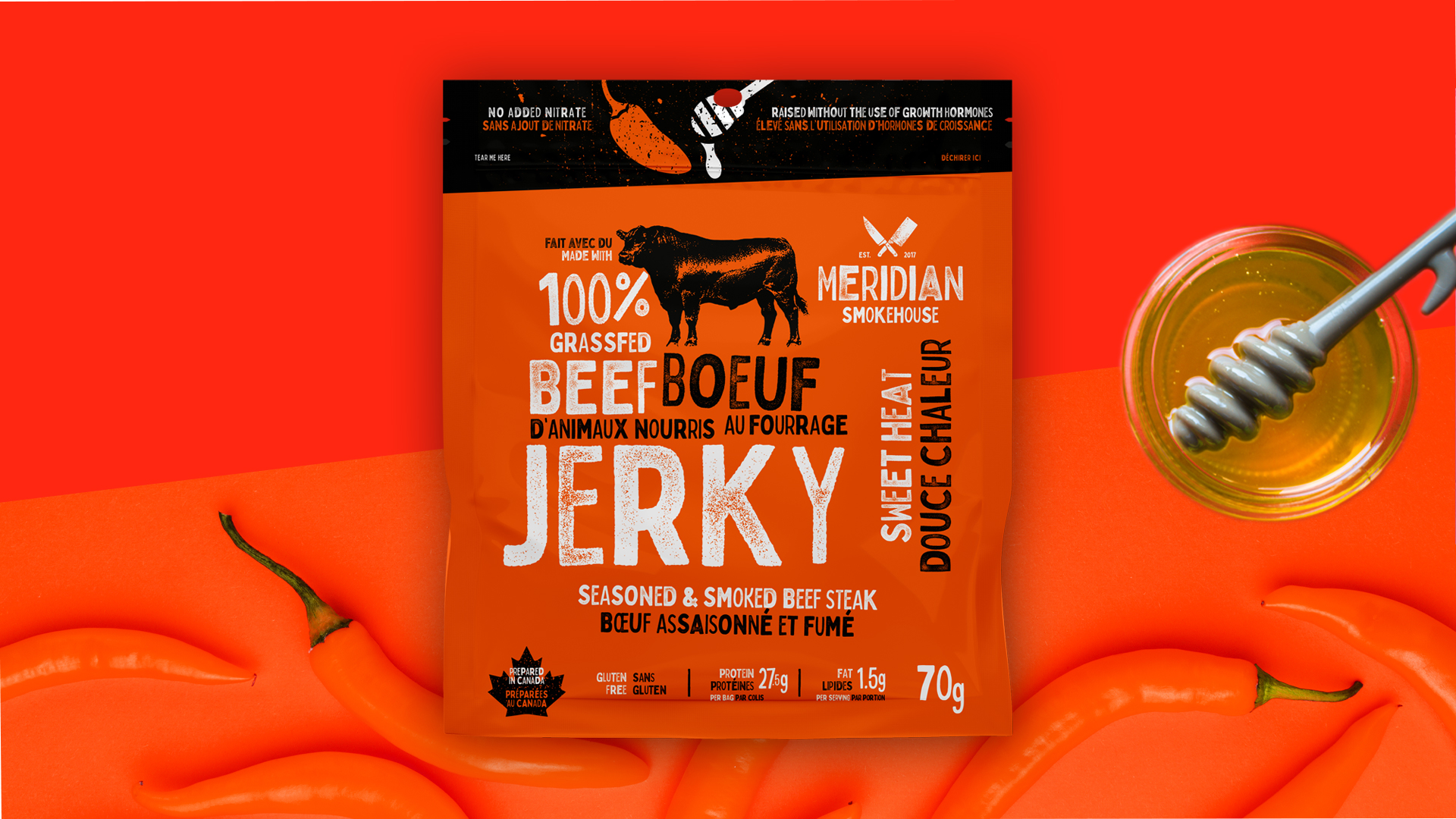 After meeting with CEO Josh Penner at Meridian Farm Market, Blue Meta developed brand and promotional strategies in order to set the direction of the growing brand – with the primary objective of helping the product resonate with the end consumer.

Following a deep dive into the Canadian jerky market, Blue Meta learned that much of the focus of competitors’ branding is significantly misplaced. While the emphasis in existing packaging has historically pointed solely towards male consumers – with packaging chalk-full of heavy reds, tough and gritty blacks, and masculine imagery – it was females that emerged as the primary purchasers of the product. And dominantly at that.

An entire audience of mothers purchasing beef jerky as snacks for their children was being ignored. In addition to learning the importance of female buyers, Blue Meta also identified an entire other sub-market. This group consisted of health enthusiasts who purchased the product primarily for its high protein content. Overall, the male target consumer represented only a sliver of the total market. So why the emphasis?

With this key insight in mind, Blue Meta began to ideate on a creative direction that would be visually attractive to both male and female buyers, without skewing too far in either direction. This meant creating easily identifiable packaging that maintained a rough edge, but not too rough so as to turn the recently identified primary consumer away.

After careful review of the existing brand, Blue Meta proposed that the jerky product move away from the traditional Meridian Farms logo, and instead rebrand under a new, Meridian Smokehouse label. Such a shift maintained an association with the parent brand while also helping to position the product for a larger scale, retail presence. After receiving an enthusiastic response, Blue Meta did just that, elevating the brand with a look and feel that kept true to the Meridian story and to their roots as an old-fashioned butchery.

As a product of this new brand, Blue Meta utilized a bold, eye-catching palette of vibrant colours – pinks, yellows, and oranges – which stand out amongst the imposing sea of reds and blacks present on the shelf currently. With a minimalistic and modern contemporary approach, large typography assists in easy product identification and more relaxed, messaging appeals more to a feminine audience. The new design also saw the product window shifted to the reverse side of the package, freeing up more room to communicate the product’s many benefits.

One such benefit involved where the product was prepared. While most jerky sold domestically is in-fact American in-origin, Meridian Smokehouse’s own product is prepared right here at home in Canada.  Blue Meta accentuated this key selling point (which had previously gone unmentioned) on their original packaging, helping to instill both pride and trust in the product. 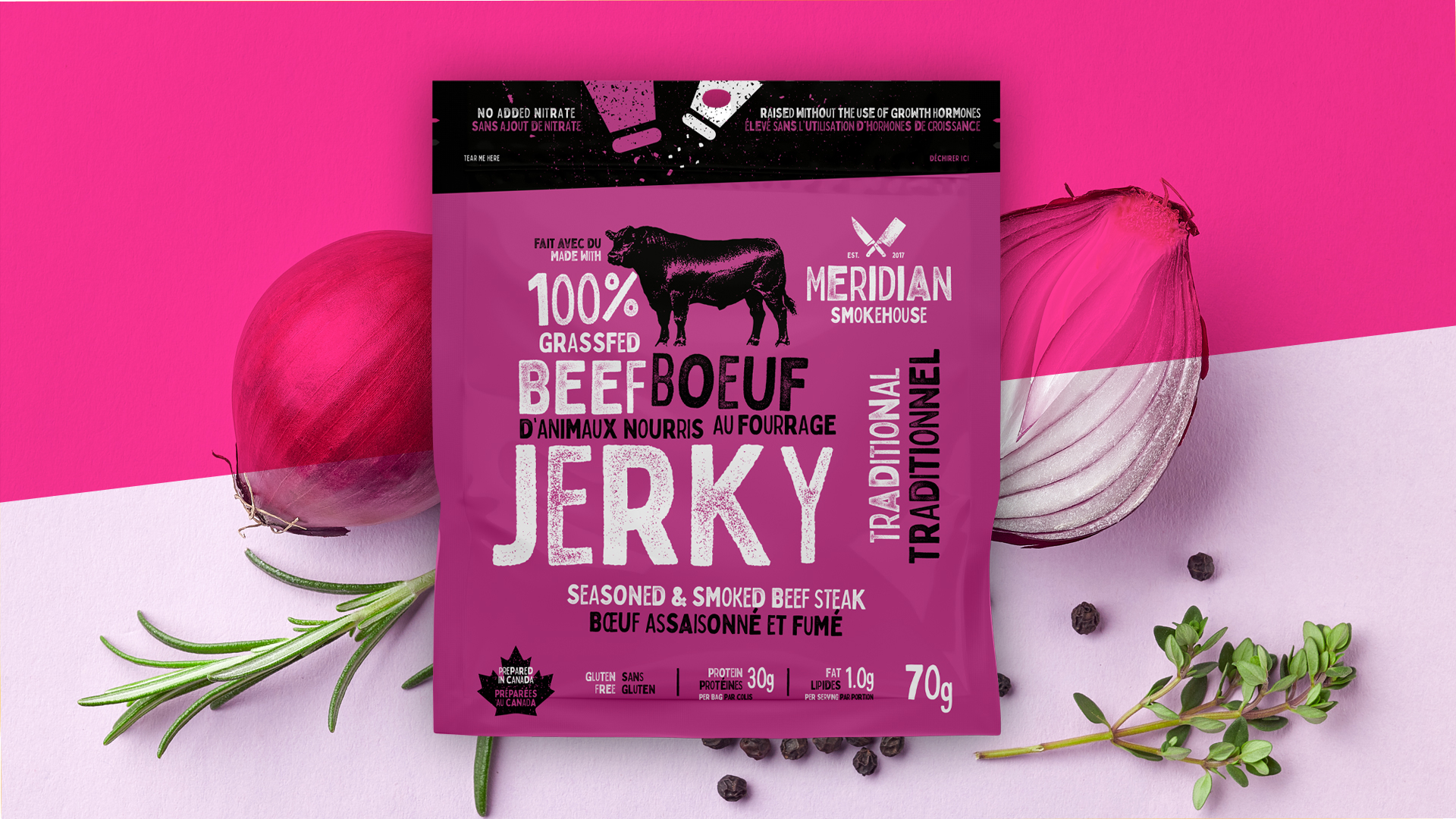 Today, Blue Meta continues to support Meridian with packaging design surrounding the roll-out of new flavours. Building on the success of their traditionally-flavoured jerky, Meridian Smokehouse has since added an additional two – Hawaiian Teriyaki and Sweet Heat – and continues to look towards expanding the line further: into other flavours and varieties of jerky. Blue Meta is excited to see the growth that the Meridian Smokehouse brand has achieved, and eagerly awaits future opportunities to sample the many new and exciting flavours to come!