ABOUT SURREY BOARD OF TRADE
The Surrey Board of Trade (SBOT) attracts businesses to Surrey while also supporting companies located there. Economic opportunity, workplace development, education, international trade, government advocacy, and business connections are SBOT’s primary service offerings. With connections to a network of over 6,000 business contacts and over 60,000 local, regional and international professionals, SBOT supports business growth, and expansions of brands and helps businesses accomplish their government advocacy objectives.

The year I Campaign: Gratitude & Impact

2021: one year into the global pandemic. At the local level, Surrey businesses were feeling the impact of health restrictions and reduced customer traffic. Typical messaging urging people to “buy local” was getting tiring and there was a sense that many were starting to “tune out”. Help was needed, something that would resonate with local consumers.

The Surrey Board of Trade (SBOT) approached Blue Meta with help crafting and launching a local community campaign that would encourage people to support local…but without actually saying it.

#ThankYouSurrey was the overarching message that would serve as a touchpoint for the campaign tactics. The underlying messaging was conveyed via a stacked tagline with a supporting descriptor:

A community coming together in trying times.

The team then rolled out a social media campaign, one that “put a face” on the people behind the Surrey business community. This provided a platform for local businesses to share the stress, uncertainty, and struggles they had endured over the past year yet still convey their gratitude to the members of the larger community who shopped local and showed their support. Indirectly, this would also demonstrate the positive impact and sense of goodwill that people can generate when they do shop locally.

Several SBOT members who had been positively impacted by the community’s efforts were profiled through a high-production hero video, which also doubled as an ad to get people to follow the SBOT Instagram account to hear more stories. The SBOT was so impressed with the results they achieved with the 2021 campaign that they approached Blue Meta one year later, asking for our help to strategize and implement an updated version of the campaign, aptly titled #SurreyStrong. 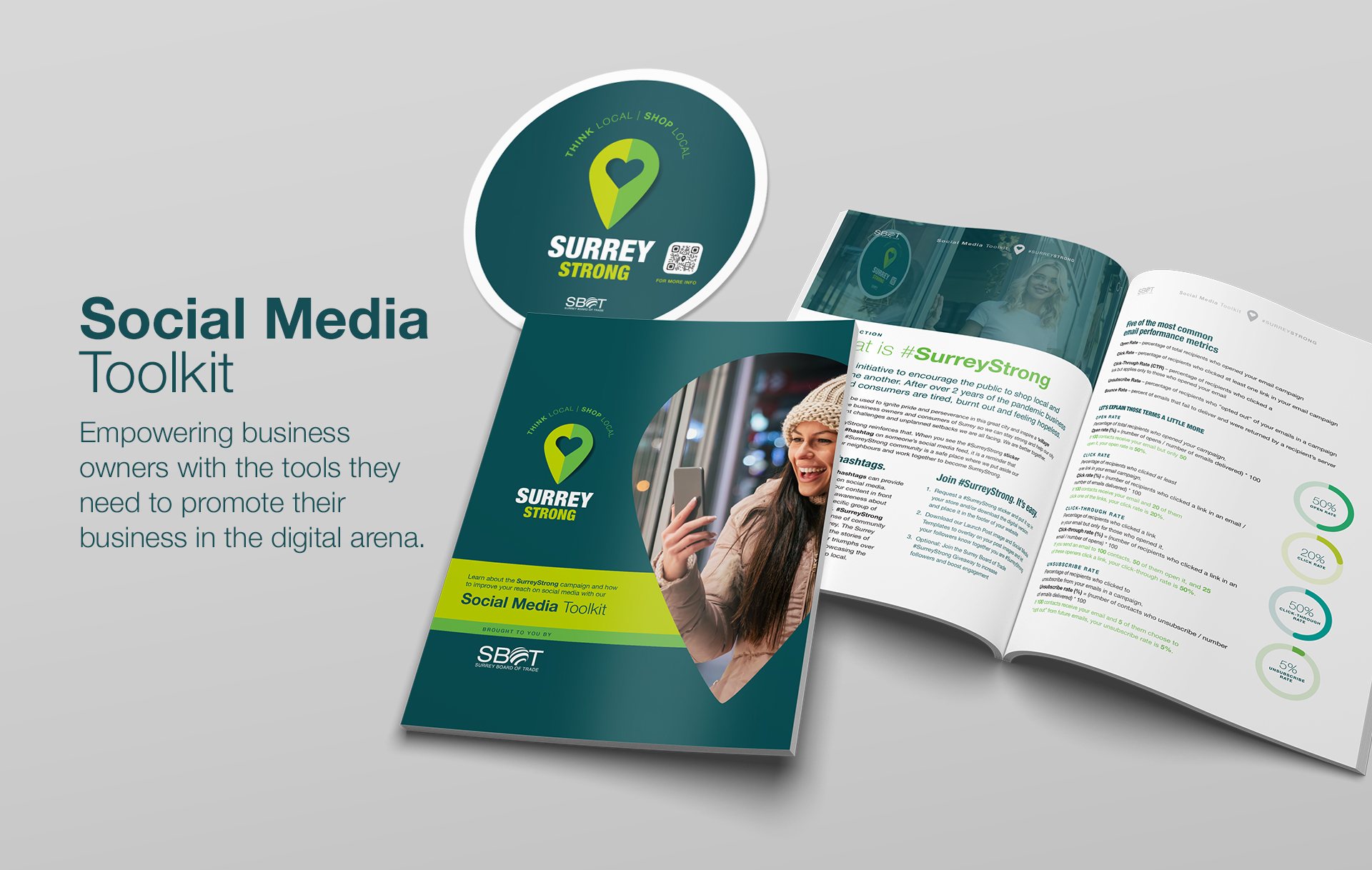 A year after the success of the Surrey Board Of Trade’s local campaign, “Thank You Surrey“, the organization once again approached Blue Meta for help in strategizing and implementing an updated version of it. 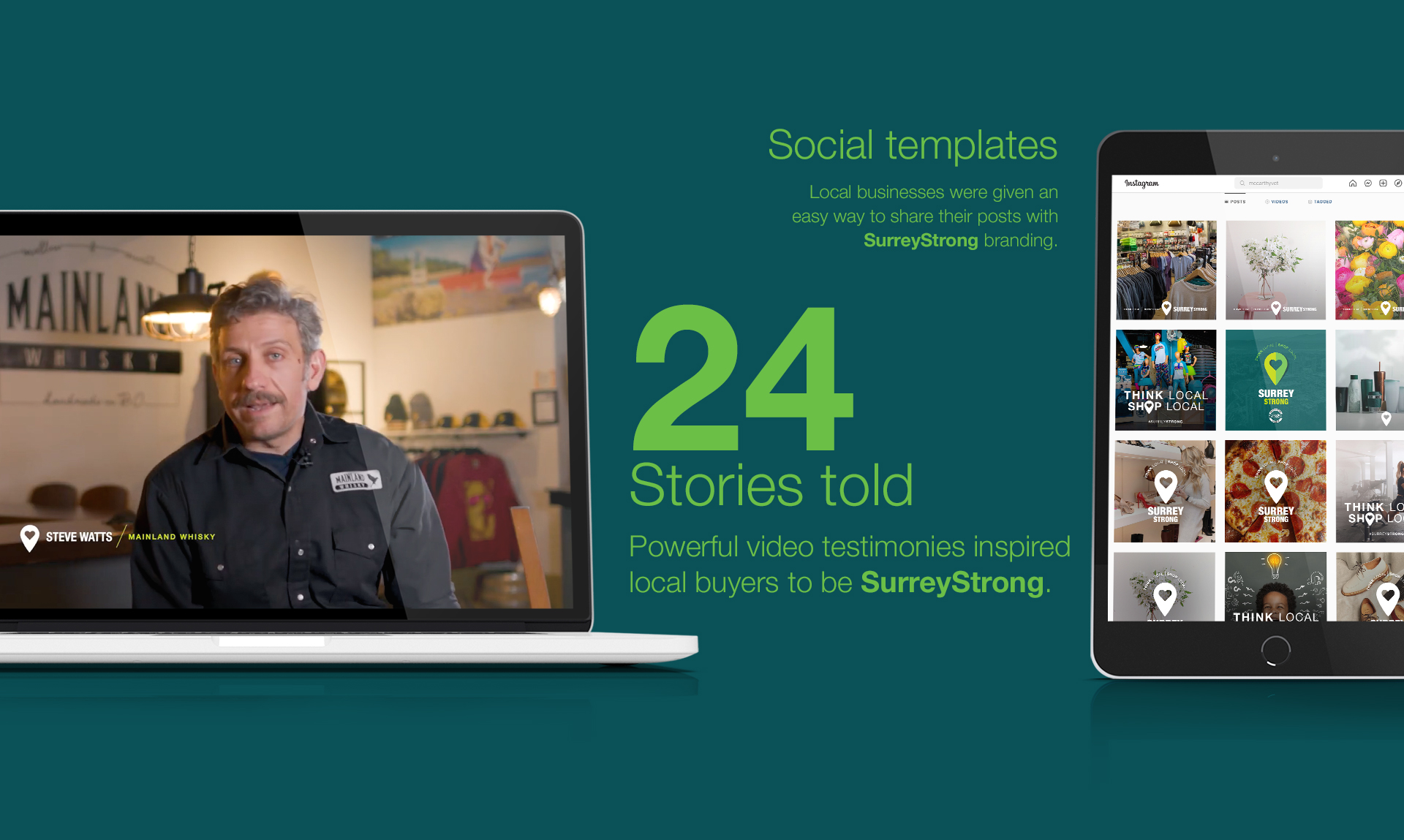 Even though this campaign was an evolution of the previous one, we wanted to shift the focus from reflection and gratitude to one of aspiration, perseverance, and pride. Woven throughout this was the overarching goal of both encouraging and reigniting a passion for shopping local.

To achieve this, the messaging was captured in an updated stacked tagline and descriptor:

The tagline represents the overarching theme and the rallying cry behind the campaign while the inherent calls-to-action in the descriptor (“think” and “shop”) were subtle reminders for the audience as to what was needed to persevere, stay strong and help the city of Surrey overcome current challenges and unplanned setbacks. Ultimately, it was to show that “we are all in this together” and that we’re “better together”.

The new tagline and descriptor were showcased in the form of a modified map location marker or pin with a center heart. The rationale behind the logo was simple: it was about community, support, and location.

Giving the updated campaign a new look was just the beginning. 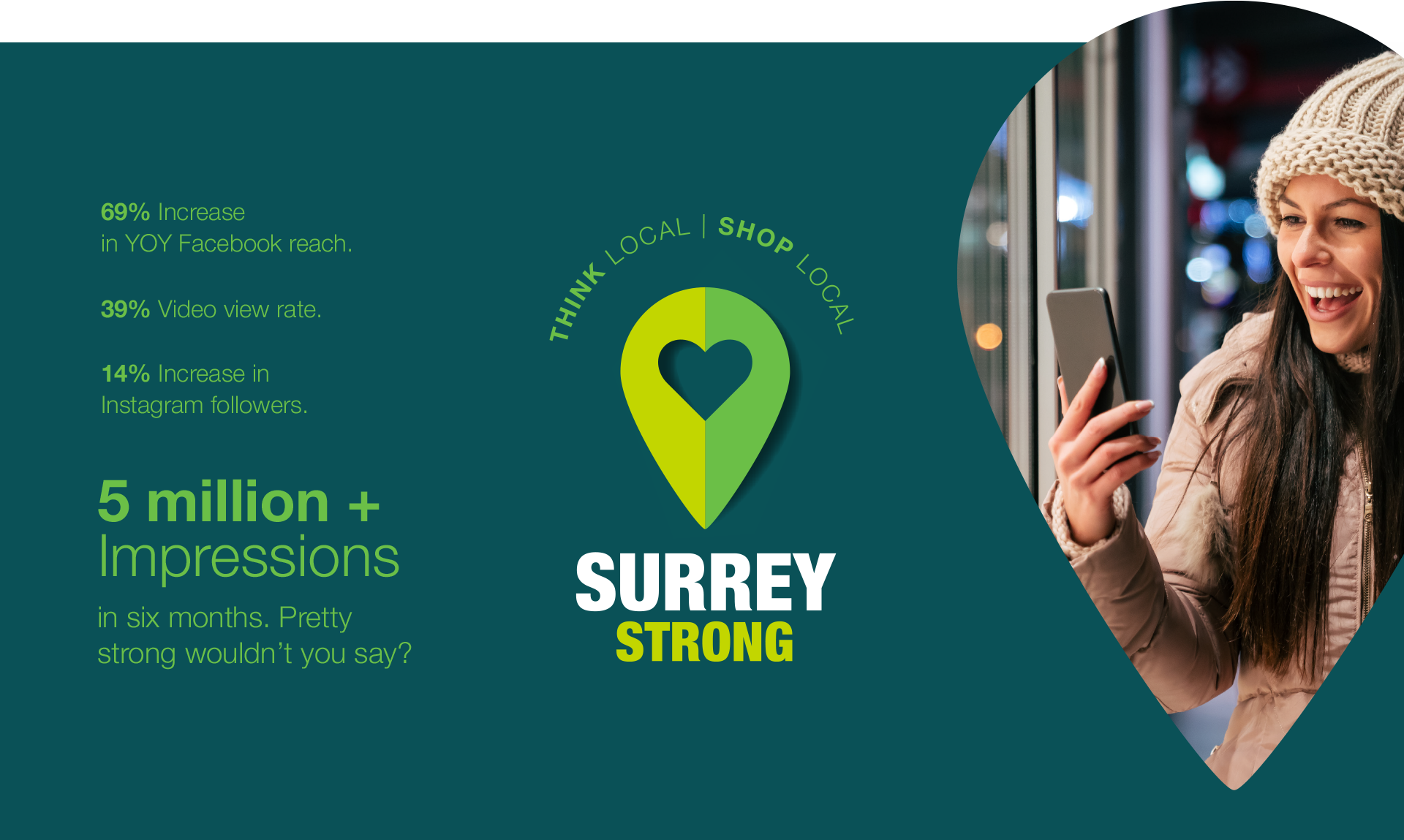 The second campaign was a resounding success within the Surrey community, garnering high levels of engagement and impressions.

Over 5 million impressions in six months