Jerky In A Box: Upping The Father’s Day Gift Game With Over $85K In Sales In Just 3 Weeks (Award Winning Campaign)

Founded in 1949, Drake Meats – producers of Jerky In A Box – has been owned and operated by the Ediger family for over 70 years. Their mission is “to bring people together around good food”, and their aim is to become a household brand, enjoyed by Canadians. Based in Drake, Saskatchewan (where the company derives its name), they are the proud producers of premium craft meats – from sausages and wieners to burgers, bites, bacon, jerky and more. Carefully crafted in small batches, their products are made from the finest selections of naturally-smoked, prime cuts seasoned with household spices.

Jerky In A Box wanted to offer three types of Father’s Day specific gift boxes at different price points to appeal to all levels of gift givers. The idea was to create urgency and scarcity for this specific time and provided something new to our already-captive audience. At the same time, they also wanted to drive awareness about their new product – Jerky Sticks – to this already-captive audience, with the new product being included as a bonus inside each box. To achieve all this, the messaging and creative had to be on point as did the digital elements needed to set up the online campaign.

Based on previous insights that had been gathered, the Blue Meta team knew that the main consumers of Jerky In A Box products were men and the main purchasers of our products were women looking for gifts for the men in their lives. So what better way to celebrate than on Father’s Day? It was a clear fit. We knew the jerky boxes would sell pretty well but we wanted to set up a campaign with an offer that all jerky-loving dads would enjoy – as well as providing an extra perk of being ‘the first’ to sample the new jerky product.

One of the earliest challenges that we identified was ideating creative that was going to catch people’s attention and communicate that the gift boxes were available only for a limited time. We also knew campaigns that run for a short time can rack up costs so it was imperative that we continually monitor to ensure profitability throughout the duration. 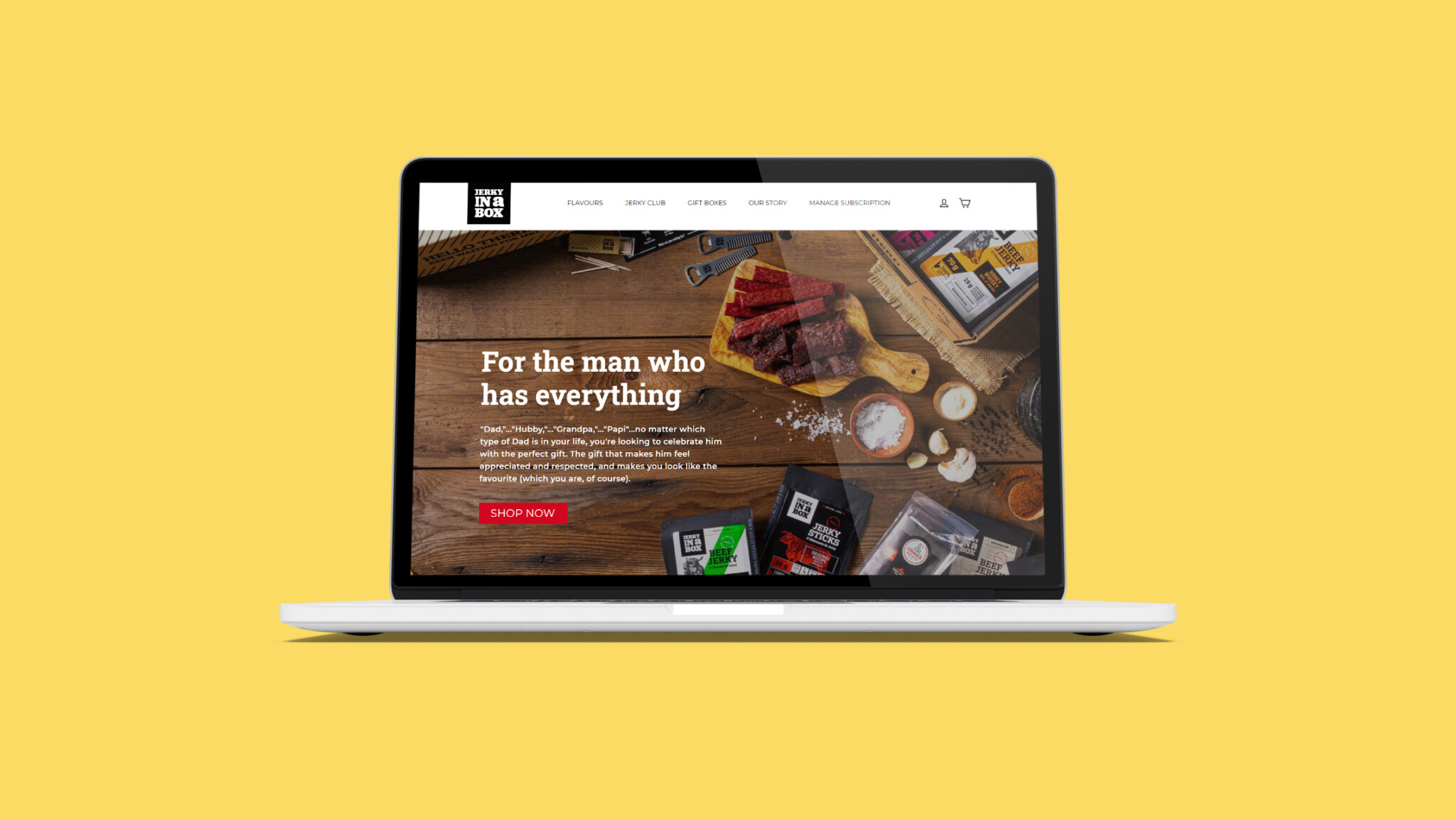 A planning session between the Blue Meta team and Jerky In A Box outlined the types of messaging that would resonate with the intended audiences while encouraging engagement and purchase. We selected a variety of tactics that would increase awareness and likelihood of purchase while doing so profitably.

Based on our research, Blue Meta determined the best time to launch to hit the peak buying window while still giving purchasers enough time to allow for delivery.

Since Jerky In A Box was created by long standing, Saskatchewan-based Drake Meats as their ecommerce partner brand, we utilized their loyal customer base to share the latest offering for Father’s Day. This included using remarketing audiences, email lists and organic social posts on the Drake Meats account.

We had yet to establish a foundation on TikTok for Jerky In A Box but thought this would be a great, inexpensive place to increase awareness. This platform didn’t produce as strong a ROAS as Facebook ads or email marketing did, but it got our message in front of many users. With engaging content and bright colours, we ensured our ad creative was ‘finger-stopping’ to catch attention on a user’s feed – using both static images and video ad creative variations.

Google Search ads were also a strong contributor to the sales as we identified many people search for new ideas of what to get dad for Father’s Day. We targeted these searches with our ads – addressing pain points of “skip the tie, get jerky” or “Dad will love this gift”. These resonated with the audiences and drove a large portion of revenue.

We also sent out a variety of emails about the launch of the campaign and reminders to buy before the delivery cut off date to ensure jerky arrived in time for Dad. Using cart abandonment marketing automations, we were also able to recover many abandon carts specific to users adding the Father’s Day boxes to their shopping basket.

In addition to the three boxes with tiered pricing, to give the campaign a full-on Father’s Day flavour, a number of items were included in each box: a branded postcard, box of toothpicks and a combination bottle opener/moustache comb.

1,297 boxes of subscription beef jerky were sold in three weeks, achieving sales of over $85,000. From the day the campaign launched, daily revenue increased 3x what the average day had been previously. With our email marketing, we were able to see attributed revenue and – the closer we got to the big day – each email sent drove more purchases.  Sales were so strong that the campaign end dates were pushed back twice. Paid social contributed the highest amount of revenue.

This campaign was recently recognized with a Web Excellence Award in the category of Advertising & Marketing / Integrated Campaign.

“The purpose of the campaign was to capture a significant portion of gift sales and it did exactly that. Sales were strong, hundreds of happy customers left 5-star reviews and the new jerky sticks we included have been a huge hit so far.”

5 Marketing Metrics and Their Definitions

An Introduction to Marketing Metrics If you had to, how would you answer…

Learning To Crawl: What You (Really) Need To Know About CRO

(June 22, 2022) – CRO is about testing ideas on how to get more conversions from where you’re at right now. To start, you need to test an idea that you believe in. Depending on your type of business, you could have anywhere from no ideas to test to a thousand to test. The key is in identifying the ones worth testing.